Recreating the Sangam and Pallava Ages: Reflections on New Writings

When I look back at my history lessons in school, I am always intrigued by my own transformation from an utterly indifferent history student to an adult with a deep conviction that history is (perhaps) the most interesting and important subject ever. I still recall with a shudder the textbooks that we students were subjected to—lists of dates and Indian kings, blurry photographs of monolithic temples, strong statements on what ‘Indian culture’ was and was not—and I often wonder if the transformation could have been more interesting, less painful, if the textbooks I used had been able to evoke some spark at that early stage. Even intelligent and well-meaning teachers (I was lucky to have some) cannot wholly neutralize the effect of such dullness.

In my own brief stint as a history teacher for middle school, I can see the absolute necessity of developing a ‘historical imagination’ in children. By this I mean an ability to perceive the deeper structures and processes at work in societies of the past, and the ability to analyse how those structures and processes differ from those currently in operation. This exercise is obviously multidisciplinary and need not be restricted to what we commonly perceive as ‘historic’. Elements of economic history and political and social theory can all play their part in evoking this picture and analysis of the past. The kings and temples are obviously still important, but they emerge as details of this wider landscape, not as the sole elements in it.

The aim of the children’s books on South Indian history (brought out by Macmillan and the TVS Educational Society) ¹ is, to quote the authors, “To bring out a series [that] describes the everyday life of the people in ancient South India.” The books tackle this issue of developing a historical imagination rather well, and use a variety of themes and devices to engage the young reader in what are quite difficult and important questions about history, society and our social assumptions. 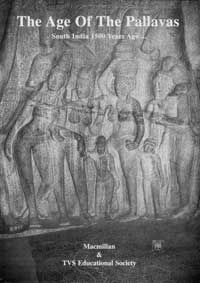 The Age of the Pallavas mainly deals with specific themes relevant to the period. At the simplest level, there are a series of descriptive sections that visually recreate the age. For example, the book describes the layout of the major Pallava cities (Mallai and Kanchi), imaginatively reconstructing the life of the city. Thus the student sees Mallai as an important center of artistic and religious activity as well as a commercially powerful and active port city. Kanchi is a religiously plural capital city as well as a thriving business center. In the same spirit, there are descriptions of a farmer’s family in a Pallava village—what crops the farmer grows, his profits, the problems associated with drought and so on. There are descriptions of festivals, clothes, even hairstyles and jewellery. These sections are easy for children to assimilate, and at the same time they provide an evocative and thoughtful picture of the times. Detailed appendices provide further information about dates, rulers, art and sculpture and various other facets of Pallava rule.

There is also a theoretical underpinning to these descriptive sections that children will find challenging to engage with. One such exploration, for example, deals with the structures of power and governance in Pallava times. The text explains the role of the king in decision-making; the duties of the king’s council of ministers; the administration of towns and villages and how these operations differed. There is a clear indication of the complexities of managing a kingdom—the problems of taxation, or the issue of maintaining irrigation systems—and the natural question that children might ask is: how are these issues dealt with today? Other theoretical explorations include the role of religion during this period, and a brief analysis of the social and cultural role of the temple. This, too, invites obvious comparisons with modern social messages and cultural assumptions.

Each section provides a brief question or activity related to the theme under discussion; this question or activity usually challenges some basic assumptions regarding the issue (“Did the queens play an important role in the politics of the kingdom? What steps are taken in your locality to prevent droughts? Compare the democratic system of governance in India today with the Pallava monarchy.”) Many of the assignments require an imaginative leap on the part of the student, requiring her to place herself in the historical context of 1500 years ago. These questions, combined with imaginative textual recreations such as the diaries of kings and letters of visitors to the great empire, make the book truly challenging as a text.

The other book in the series to have been published so far is The Sangam Age, dealing with the historical period in South India about 2000 years ago. As with The Age of the Pallavas, the attempt is to recreate the everyday life of the people of ‘Tamil-Aham’ in that era, and the authors have chosen to do this through the point of view of two young children living in Madurai. The text describes a typical day in the life of the children and their parents, and manages to pack in a lot of cultural and social information using this technique—the structure of the city, the way the houses were built, the way festivals were conducted, the harvest season and the activities accompanying it and so on. When the family decides to travel to the adjoining Chera and Chola lands for commercial and religious purposes, students get a glimpse of what these social and cultural contexts must have been like. The family pass through different ecological zones, each with their own distinctive lifestyles and practices. Similarly, the great cities of Vanji and Puhar emerge in quite distinct and exciting outline.

The scope of this book seems simpler than that of The Age of the Pallavas; the theoretical background is stressed far less and the questions are not woven in as an integral part of the text, a technique that worked particularly well with The Age of the Pallavas. Nevertheless, the narrative works well, and children respond positively to the idea of history told through their perspective. A series of activities, such as making a palm-leaf notebook or a Sangam-age oil lamp, add a sense of excitement and discovery to the whole process of historical recreation.

I must mention one important detail in both these books that I find very interesting—the question of ambiguity, both in source material itself and in its interpretation. The authors do not shy away from this tricky issue, and they try to tackle it head on. In The Sangam Age, for example, readers are informed that most of the source material for the text is from the ancient Tamil poems of the time—mainly, the epics Silappadhikaaram and Manimekhalai. Many of the details in the textbook, the authors inform us, are obtained from these poems: descriptions of bazaars, palaces, people’s dress codes. However, the authors also go into the question of whether these poems can be used as source material or historical evidence at all, containing as they do so many contradictions and exaggerations. Although the authors do ultimately conclude that the poems are a ‘storehouse of useful information’, such an engagement on their part encourages children to reflect on the sources of historical information, on why historical reconstruction takes place at all, and even perhaps on the ideologies that might guide and shape such reconstructions. In the same way, The Age of the Pallavas presents three different views on the origin of the Pallava kings, and encourages the reader to debate on which of the three views might be ‘true’. What I particularly enjoyed was the potential for engagement with the subtlety and ambiguity of the process of historical understanding and recreation.

¹ The books reviewed: The Sangam Age and The Age of the Pallavas by Malini Srinivasan & S. Suresh, Macmillan & TVS Educational Society.