Learning About the Beginnings of Life: Reflections of New Writings

The two-volume text entitled ‘Prehistory for Indian Schools’² relates the story of the origins of man as he came down from the trees, from his huntergatherer days down to his role as a shepherd and, finally, giving an account of the beginnings of agriculture which in turn helped man to move from a simple to a complex society. These two books are respectively entitled Our Tribal Ancestors and Shepherds and Farmers. It is interestingto note that most people are not quite convinced that what is taught in this course is history as they knew it! Why is history being taught this way?!

The significant departure in these books is the use of anthropological material. History as bits and pieces of (very often) unconnected facts, of the chronicles of kings and queens, or glorifying the life of a ‘great man’, no longer has a place in a school. Short narrative histories should be worked into the text, no doubt, but they would first need to be contextualised. More than that, history learning itself needs to be well grounded. How is this done? Darwin seems to have supplied the clue to this. The book says that, “Darwin’s hypothesis (of evolution by natural selection) was based on ‘very close observation of nature and on asking the right questions.’” This is as good a beginning as one could hope for while addressing young students.

As to the pedagogy of the text, some difficulties arise. Having to communicate concepts such as natural selection, adaptation, struggle for existence, species etc., is difficult enough, but how does one connect it to the central message of the entire course? That all life can be traced to a common ancestor, thus all life on earth is connected; human beings themselves owe their existence to a branching off from the apes some six million years ago; that we are part of nature—this is a breathtaking sweep of early history which is seldom looked at by adults, rarely taught in schools and, even if taught, certainly not in the way it is attempted here. 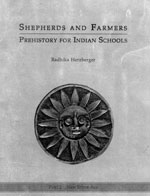 The text is couched in such language and such terms as to encourage the child to ask some fundamental questions that gradually introduce her to the topic relating to the origins of man—in short, to ask the right questions. How is prehistory written? What is a hypothesis? What is evidence? As written records are not available, how do we piece together the history of the Stone Ages? What are fossils? What is extinction? Do human beings play a part in this process? Do ancient myths have a role in our understanding of the past? How do you separate myth from history? What is culture? In answering these questions, the teacher will be able to not only teach history, but also understand the processes involved in the writing of it. As fresh evidence is discovered, history has to be revised in its wake. Thus the child learns such things as scientific rigour and the ability to look at things dispassionately.

One of the ‘intentions’ of the course is stated explicitly in the text: it is to show ‘that the many cultures on Earth reflect the geographical diversity of our planet. Human cultures are the result of the earth’s varied climates and her varied vegetation. Just as we respect variety in nature, so also we must learn to respect differences in culture.’ The content of the course must be studied in the context of the daily life/ experience of the children, not vaguely floating in the distant past. Do you want to emphasize the oneness of life? Bring in Darwin and his theory of natural selection to point out that all life perhaps sprang from a common ancestor. In order to convey the vitality of such a term as ‘unity in diversity’, for instance, textbooks of old used to say, ‘we may belong to different castes, religions and have different colours of skin, but beneath that we are all Indians.’ Many of these notions are themselves questionable in a fundamental sense, and it is in any case too soon to expect a 12-year-old child to grapple with phrases such as ‘being Indian’, ‘nationalism’ or ‘unity in diversity’ in the abstract. One needs an immediate context in which these can be taught. For instance, the child can get a sense of the infinite variety of life by noting the colour of the cows in her own backyard, the differences in the physical appearances of her classmates, the way they speak, their tastes, likes and dislikes, and so on.

The relatively peaceful ways in which ancient tribes resolved conflict can become a clue to our understanding of, say, the nuclear weapons issue or other international conflicts. In order to see that bias and prejudice are at work in our minds all the time, a chapter on the nature of prejudice talks of the ways in which each one of us has myriad prejudices embedded in us. “All of us have prejudices of one sort or another. We are prejudiced against individuals as well as communities…It is important to lay bare our own prejudices…it is also important to find out why we are so prejudiced. And finally, and most important of all, it is necessary to free ourselves of prejudice.” This process brings a sense of humility in each one of us, and the fact that the teacher and other elders are also subject to prejudices is not lost on the child.

Later, when the lives of the shepherds and farmers are studied, an attempt is made to go out and see the life in the valley around the school where many people live their lives substantially as their ancestors did for perhaps thousands of years. We are even able to go and see for ourselves a megalithic site lying about thirty kilometres from the school. Can the lesson be taught in such a way as to make the child feel she is a participant and not a spectator? Even when questions arising out of the individual units are answered, the lesson is not over. Fictionalised accounts of real discoveries, class discussions, projects based on rigorous research done in the library, video films— all these help in making the course more varied and interesting than one would expect. The myths and poems introduced as enriching material help in the celebration of life from a different point of view. The development of an aesthetic sense is an important by-product of this approach.

Love means to learn to look at yourself
The way one looks at distant things
For you are only one thing among many.
And whoever sees that way heals his heart,
Without knowing it, from various ills—
A bird and a tree say to him: Friend.