Cities and Cultures: New Approaches to the Curriculum

New ventures often begin with discontent. Social studies for class 6 had long been such a zone of discontent in our school. Sandwiched between an experientially rich environmental studies curriculum for class 5 and two intensive and stimulating courses in geography and history at class 7, social studies occupied an ambiguous niche. Over the years, this niche had been filled in with different kinds of content and given various forms, none of which had been found satisfactory.

Two years ago, the humanities faculty embarked on a series of curriculum meetings to rethink the class 6 social studies course from scratch. The questions before us were: what was worth teaching about human societies and cultures, about the past and the present of humans in their diverse settings? In what ways could we make the curriculum both exciting and relevant for the children of today?

The social studies curriculum, we felt, should not be based on a single cultural world-view, but draw upon a diversity of human heritage from different parts of the world. We wished to incorporate myths, stories and life-sketches from different cultures; but also locate any narrative within a framework of carefully chosen concepts. We wanted students to have an understanding of cause and effect in social phenomena, and yet steer clear of a linear sense of ‘progress’ through time. There ought to be room for students to form their own judgements, some scope for pursuing their own questions and researches, as well as a range of activities that could make the experience of cultures and events more alive.

In trying to draw together these different levels of concern, a unifying idea that suggested itself was that of ‘cities and cultures’. In the sweep of human history over the last several thousand years, the development of a great variety of urban cultures across the world has had the most profound impact on world culture today. Any representative city, being embedded in a particular geographical and sociohistorical context, could provide a focal point for the study of the cultural matrix from which it arose. We chose a few ancient as well as contemporary cities across the world— Loyang from Ancient China, Athens and Sparta from Greece, Benares from India, and London from Great Britain. Each of these, we felt, provided a unique window for looking at different ways of studying particular cultures.

Journeying through three cities and their cultures 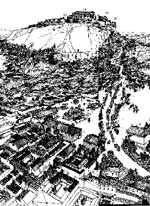 I will attempt here to give a brief overview of the kind of learning that students are involved in as they journey through three of the cities and their cultures, and then describe in more detail one of these units— the one that revolves around Loyang in China. Since this will be discussed in greater detail later, it is not included in the following overview.

In Ancient Greece, the students learn about a sea-bound peninsula, fragmented by mountain chains, which bred a spirited, hardy people whose lives as part of small city-states were shaped by the geography of their land. They look at the structure of a Greek town and the daily life and occupations of its people; examine the contrasting mentalities and conflicts among city-states like Athens and Sparta as well as their glorious unified resistance to Persian invasions; and study the emergence of democracy and other fine cultural achievements of the Greeks that have long become part of human heritage.

In visiting Benares, students have an altogether different experience of first encountering the city through the eyes of a great variety of visitors, and sifting fact from opinion. They learn about the special site of Benares along a bend of the Ganges, where an ancient city has absorbed into its complex fabric the many layers of Indian history, with the flowering of its various religious movements. By exposing them through stories and myths to the subtle Indian notions of time and space, of cycles of creation and destruction, and the different forms of divinity, they are led to an understanding of the sacredness of Benares in the Indian world-view. 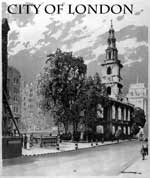 The journey to London takes in snapshot views of the city through the ages. Beginning with its establishment by the Romans as a trading post on the river Thames, they see Londoners living a life under colonial rule and adopting the customs of their rulers. They see how the city—much later in time—faces terrible hardships like the Plague, the Great Fire and the bombing blitzkrieg of World War II, and each time revives itself with renewed vigour. They learn about how the lives of Londoners changed during the ‘factory boom’ of the industrial revolution and how the problems of poor living conditions as well as pollution in the Thames were tackled through legislation and civic action.

Studying Chinese culture and the town of Loyang 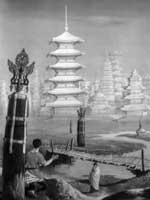 Extensive readings through a range of reference books and magazine articles, as well as searches of internet websites, helped in identifying a few key events and concepts that are both accessible to students and crucial to an understanding of Chinese culture and world-view. The one ancient Chinese town on which we found a beautifully illustrated children’s book, Inside an Ancient Chinese Town, was Loyang, a capital city of the Han emperors. This became the choice of city to focus on, and we drew extensively from this book. We also felt that rather than deal with the concepts identified explicitly, we should weave them into a series of lively narratives and activities.

Objective: To give students a preview of different facets and artifacts of the culture they will study.

Material: This is an exhibition of pictures of people, places, and architecture as well paintings from a variety of landscapes and cultures, along with a few devices and materials that we use today (umbrella, paper, silk, kite, compass, matches plus others).

Student activity: Students go around the exhibition in groups and try and identify or guess which places, architecture, people and paintings are Chinese, and which of the materials and devices were first invented and used in China. They write their choices on a worksheet. Then they discuss these and share what they already know about China.

Objectives: Students learn about the ‘first emperor’, Chin Shih Huangdi, who unified China through military conquest. The concepts of empire and maintenance of unity through force are discussed.

Material and Sources: Dramatic pictures of a vast buried army of terracotta soldiers with horses near the first emperor’s tomb is followed by brief texts and pictures on the life, achievements and cruelties of the emperor. Pictures and texts are drawn from National Geographic World magazine as well as Highlights, a children’s magazine.

Student activity: Students work in pairs to look at pictures and text, along with specially prepared worksheets, to interpret, glean information, and discuss.

3. How the Han dynasty came to rule China

Objectives: Students learn of a peasant uprising that led to the Han dynasty ruling over the Chinese empire and how a new form of governance, with a well-organized administrative system, came to be established. The concepts of dynasty, division into provinces, a hierarchical bureaucracy or civil service, and merit-based public examinations are introduced. Awareness of similar administrative systems adopted by countries like Britain and modern India is brought in.

Material and sources: The text, narrating these new developments in China and the evolution of various facets of a bureaucracy, is largely adapted from the Oxford Children’s Library, Vol. 17, on China. The eight paragraphs of the text are cut and pasted on separate cards.

Student activity: Students work in pairs to scan the cards and arrange the text in the correct order. Then they read it more closely with the teacher for an understanding of the new vocabulary and ideas introduced, followed by individual completion of a worksheet. A class discussion extends students’ awareness of the administrative system in our country.

The other units are about the varied landscapes of China, a visit to Loyang, the capital city of the Han emperor, the Farmer’s Year, the life and teachings of Confucius, family life, children’s upbringing and festivals. As a final experience, aimed at consolidating and extending their learning, the students view a visually stunning documentary film, The Heart of the Dragon, made by the BBC in the 1980s. The first part, entitled ‘Remembering’ takes us back from post-Mao China to the times of the ‘first emperor’ and his ‘terracotta’ army, and then leads us through major themes in Chinese history and its cultural achievements to its troubled history in the twentieth century. Mao’s revolution and subsequent legacy as the unquestioned leader of China seems to echo the dual legacy of the ‘first emperor’. In this way the unit on China concludes by giving students an opportunity to see how ancient cultural patterns continue to shape society even in present times.