On Re-designing Spaces for Learning

Thirty years ago, when a teacher had started building a school, she received a suggestion from the architect, “Make the windows four feet off the floor so that the children don’t look outside”. Keeping children inside concrete walls, away from ‘distractions’, was a common practice.

In recent times, however, educators and architects have been experimenting with spaces differently. Architectural psychology, a relatively new field, has been delving into questions that could throw light on how physical spaces might impact human behaviour, emotions, attitudes and social interactions. Some of the research findings have been implemented in designing more engaging and compassionate spaces for children. For example, a children’s hospital in Pittsburgh introduced design features such as softer materials, low-level beds, natural light and a healing garden. These have been found to accelerate recovery and create feelings of emotional and physical well-being among the children and their care-givers. 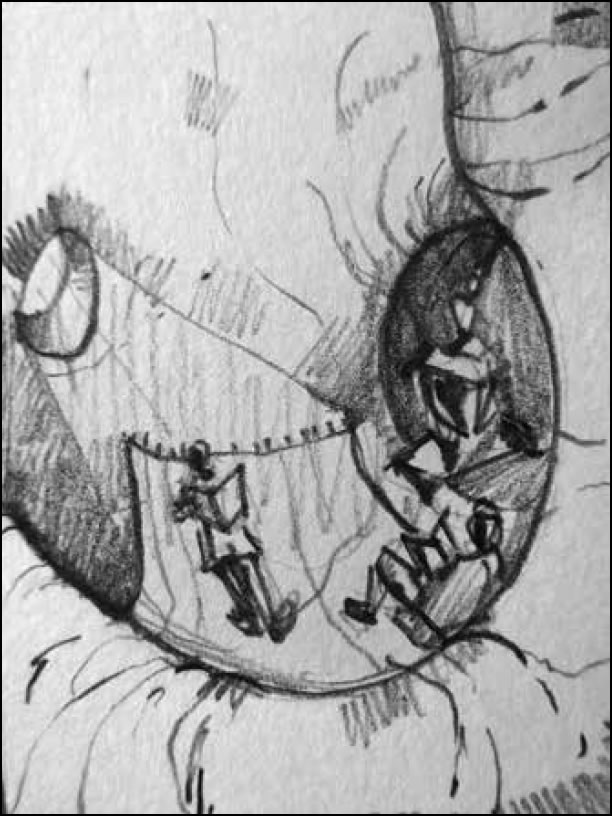 Spaces, in many ways, facilitate or hinder our interactions with world. Crowded spaces might make us anxious and deter us from engaging with people, whereas a sunlit room can inspire feelings of lightness and joy. This raises quite a few questions in the context of a school—what impact does architecture of a school have on children and educators? Are they truly spaces of learning that foster creativity and curiosity? How would such spaces look?

On a visit to a school in Goa, I was struck by how huge I felt in the space—the archways to the classroom were low, the sinks were just two feet off the ground and slides ran between the floor levels. Every classroom had an outside corner lined with bricks and plants. The nursery section had a doll house—a play area with a kitchenette, dolls and other playthings. I instantly knew that this place belonged to the children. Apart from the delightful corners (the cupboard under the stairs was titled ‘H. Potter’s Cupboard’ and stored sports equipment), the space let in plenty of natural light from whimsically designed skylights and walls lined with glass bottles. This created a sense of space, despite the scaled down furniture and walls. 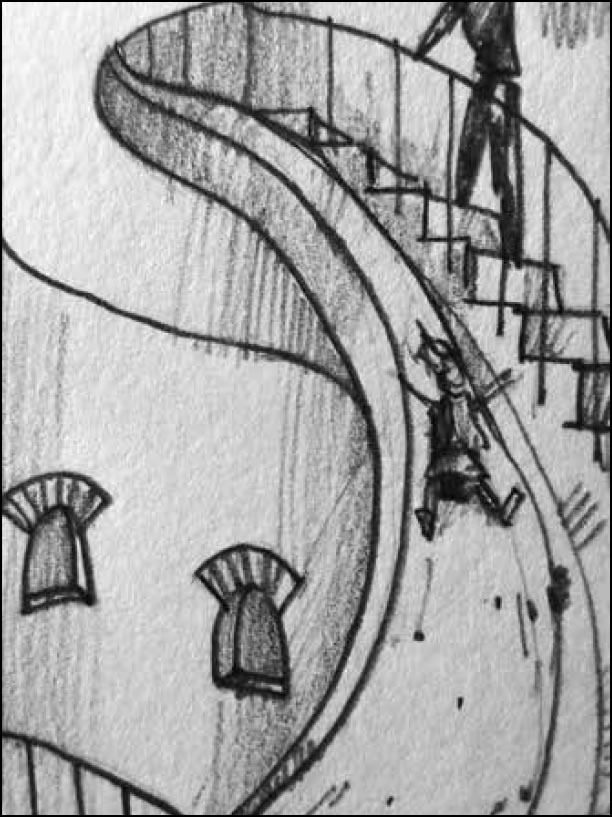 But it’s not only the rooms and furniture that can foster creativity and learning. In Rishi Valley School, the trees on the school campus are as much a part of our ‘architecture’. They provide their own benchmarks and sculptural spaces to explore. The freshers are usually introduced to the easy tree—a low lying, heavily branched tree—which even the smallest could climb. Then comes the KBT (Krishnamurti Banyan Tree), a generous banyan tree with roots to swing from, cocooned within a grassy landscape dotted with flycatchers. And later, they can move on to trees that are more challenging to climb.

Contrary to the architect who suggested keeping the outside away from the classroom, bringing nature into the classroom by having larger windows or potted plants has been shown to reduce anxiety among students and encourage a positive learning environment. Letting natural light into a room has been proven to optimally regulate the circadian rhythms in the body, increasing productivity and level of comfort. Of course, the ideas behind these studies are not new. Krishnamurti, Tagore and others have always placed nature at the centre of the learning process. These studies have served the purpose of fine tuning our spaces and building them more consciously. They also throw light on the fact that spaces not only create a culture but also carry ideas from a particular culture. A school that places environmental consciousness, compassion and relationships at its centre might not limit itself to posters on the wall. The built spaces communicate these abstract ideas in more concrete form.

While more and more learning spaces are trying to include the outdoors within their classroom structure, some have explored this idea in a more radical manner. In a school in Auroville, the township itself has become the classroom. The children meet at a ‘basecamp’ in the mornings. It is an open space with a wooden shed, kitchen and dining tables. They meet here to do some math or English work in the mornings, grow their food and eat their meals. After this, their ‘classes’ are held in the homes of the parents who have volunteered to teach them that day. The children walk or cycle within the community, visiting different homes, interacting with the community and learning what different people can offer. This can be as diverse as learning English through baking, learning a recipe and doing worksheets based on the recipe, or visiting a forest community to build a machine that grinds using pedal power, integrating science concepts into the process. Since the resources already existed, it made most sense to use the community as the learning lab rather than simulating it within a closed environment. It also encouraged the children to become more comfortable with the environment around them and gave them a context to interact with people from their community in a meaningful manner. 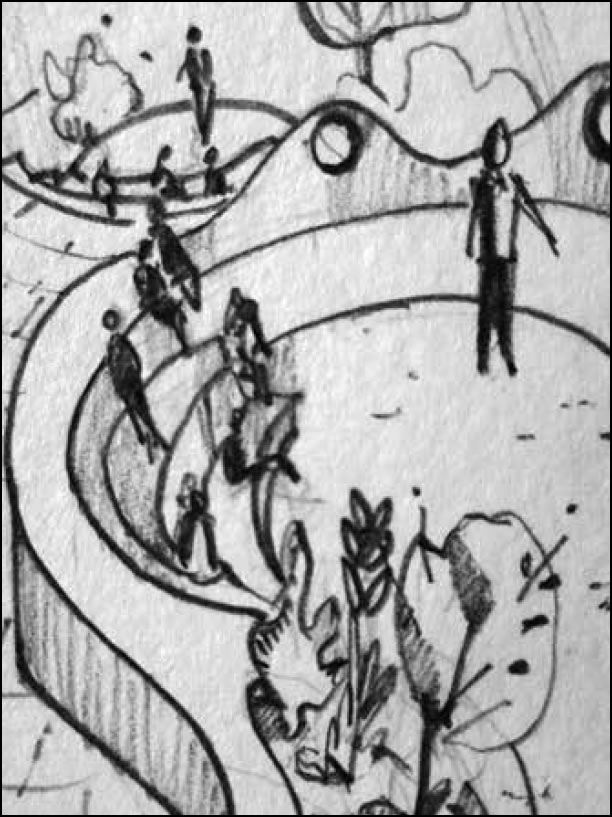 Another aspect that has its roots in traditional architecture, but has been adapted to educational settings, is interactive architecture. The architecture lends itself to being a living entity. Windows of course let in light, but what about that window with the perfect ledge to read by, or the window that has patterned grills that are perfect for climbing or working out multiplication problems? There have been several such instances where spaces have been made flexible to suit different purposes. While moving desks to facilitate group work and individual work has been the most viable, physical structures have also been morphed to facilitate interactions and solitude. The Cuckoo Forest School in Thiruvannamalai has etched traditional games such as Pallanghuzhi, Atta Kozhi Attam and Seven Stones on their porch, encouraging students to play and converse while they sit outside.

A school in Bangladesh, built using local materials such as bamboo and mud, has included a feature where the walls are curved to make little cubby holes. These encourage students to find solitude and quiet within their classroom space. 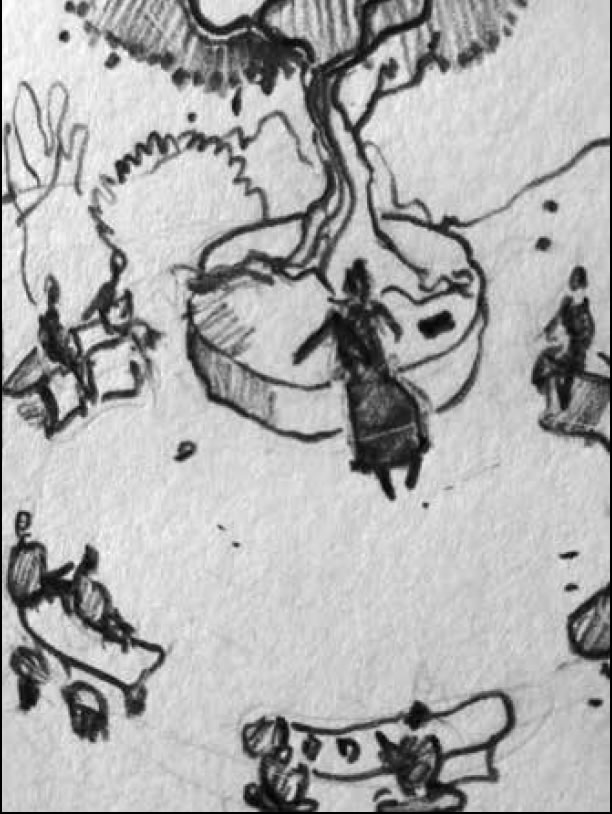 I have found that such spaces work well when they are clearly demarcated from the classroom spaces. In a school in Ooty, we had a quiet room within the classroom. This room had a small library, cushions, blankets, soft animals and other comforting objects. It allowed natural light to come in and had a most delightful little fireplace that added to its charm and sense of cosiness. When new children came in, they were oriented to the space and the older children would suggest instances of when they could use it. The reasons ranged from being tired, wanting to be alone, writing something, or feeling less angry. We communicated that we trusted the children to use the space when they needed and that they could call for an adult if they needed one. Otherwise, the adults usually did not enter the room when it was being used. As more autonomy is encouraged among learners, such spaces become critical to identifying their needs and styles of working. Over time, the children learned when they needed solitude, how to comfort themselves, and to take responsibility for their emotions.

Keeping these ideas in mind while designing spaces of learning are now very much part of more newly constructed schools. However, before referring to research, the best design consultants are probably children themselves and the architects are listening. A friend who was designing a play-scape for children had a curious way of understanding elements that were important to them. He would ask them to give him directions from where they were standing to the closest playground. He found that they never used billboards or signboards as landmarks. This is quite logical as most such landmarks are above their eye level. On the other hand, they made some keen observations. The house with the spotted dog in the front or the ripped up tree were some of the descriptions given to him. The world was much more dynamic and alive when it came to them. They were asked to describe their ‘dream parks’, elements of which were then included in the design. Quirky details and colours, such as an alligator’s mouth to enter the tunnel or polka-dotted swings, were some of the recommendations given and these helped him design a wildly popular play-scape for the community.

Our feelings and ideas about spaces are constantly evolving as we continue to engage with them over time. From architecture in schools being designed to monitor and control children, we are moving towards restructuring our spaces in order to encourage creativity, play and joy. As we work alongside children, perhaps breaking down a wall or two might not be such a bad idea after all.