The Context of our Lives

In astrobiology and planetary astronomy, there is an idea called the ‘Rare Earth Hypothesis’. It argues that the emergence and evolution of a complex multicellular life form on earth required an improbable combination of astrophysical and geological events and circumstances. It tells us that our existence on this planet as a species was a highly improbable event, yet one which became a reality! In short, we are very lucky indeed to be here. It is good to be reminded of this at times when we are feeling particularly self-enclosed and short-sighted. Often we fall into thinking that the whole world revolves around our narrow concerns and needs, and we see this tendency in ourselves and in our students.

My friend and I once had an interesting conversation about the purpose of education. She said something that I’ll never forget, “I think an important purpose of education is to learn about the context of our lives, that is, to find our place on this earth.” This got me thinking. How often do we ponder about the context of our lives? How often do we talk to children about the context of their lives? Do we even know how we came to be where we are right now—the set of events, circumstances and choices, both ours and others’, that led to things being the way they are right now? The answer, of course, varies from person to person but there is also an objective context that we are all part of.

Looking back in time, it took a very long time for us to be part of this cosmic context. The beginning of the universe 14 billion years ago, the formation of earth 4.5 billion years ago, millions of years of evolution of different species from the ocean to land and all the way back to about 160,000 years ago when our ancestor, Homo sapiens, was born. We moved from place to place hunting and surviving and in the process spread all over the earth. However, once we invented agriculture about 10,000 years ago, we started to settle down at one place. This brought about, for some people, more time and space for intellectual activity, curiosity and questions that led to the invention of mathematics, language, art, science and philosophy. There were also revolutions, wars, overuse of resources, and here we are in the twenty-first century not in the most ‘civilized’ state as a species.

For putting things in perspective, let us scale this enormous dimension of time to a more perceivable unit of time – 10 years. Given below is a timeline of events with the actual age of the event and a scaled age, if the universe were ten years old. From the table, we are an hour old as a species and the people alive today have been around only for around two seconds. In fact, most of us will only live for less than two seconds and this is our context in the dimension of time. What about the dimension of space? 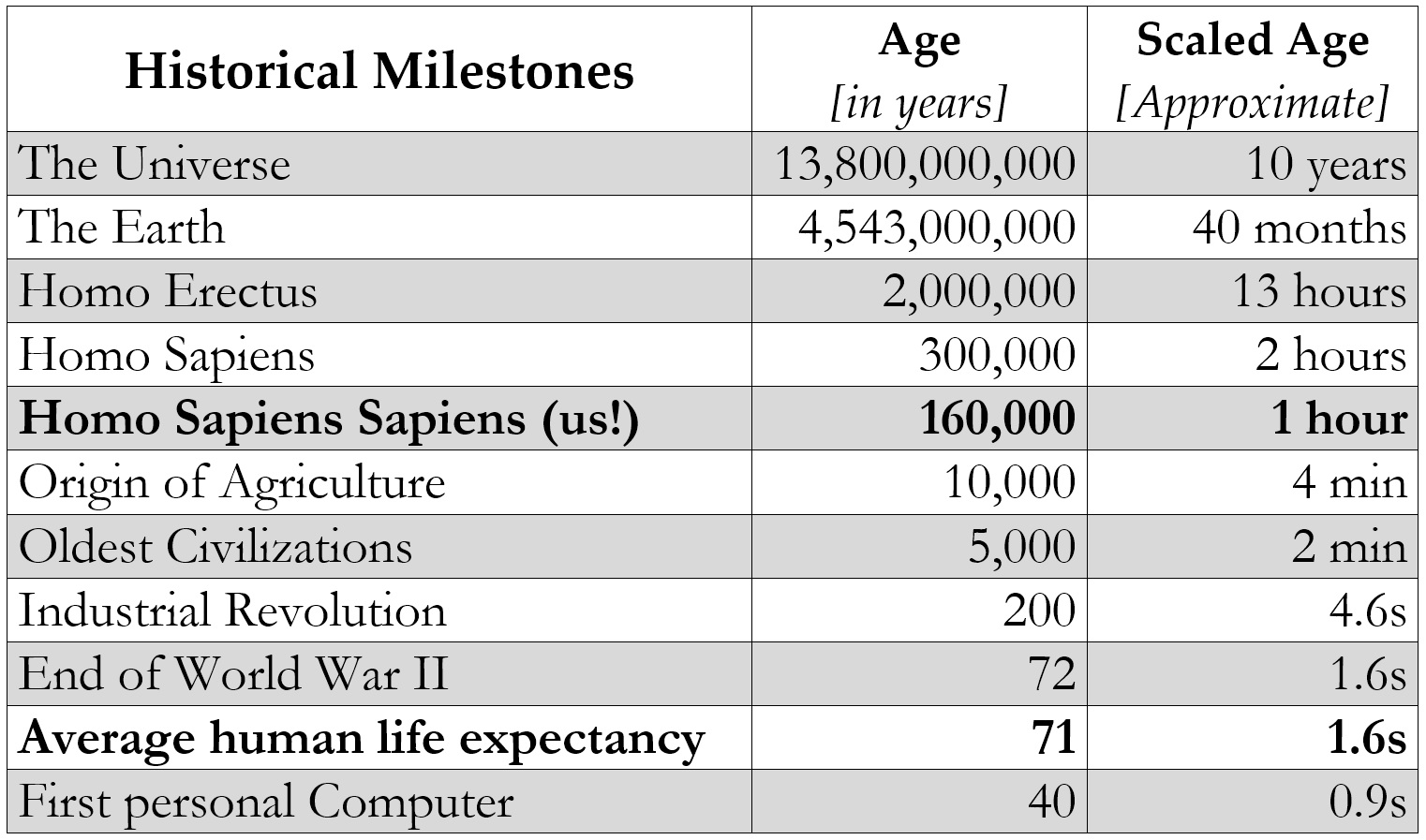 We live in a country that is huge and diverse, on the largest continent on the planet. The earth is huge enough for us to take a whole lifetime to explore all of it. But the earth is small compared to planets like Jupiter and not to mention the sun that is so massive that it keeps us warm in spite of being 150 million kilometres away. What about our solar system which is only a speck in the Milky Way galaxy, which in turn is 10 17 (1 followed by 17 zeros!) kilometres wide? And there are 10 11 other such galaxies in the universe! The universe is unbelievably old and unimaginably enormous and from this cosmic context of space and time, we are an insignificant carbon unit on the ‘third rock from the sun’. Yet we are the same species that arrogantly believed that we were the centre of the universe just a few hundred years ago!

In this very short span of time, we live in relation with others around us. However, while people may talk of such relationships often, most of us are oblivious of their complexity. Here is an exercise I have performed with children about an everyday incident that will give us some perspective into this matter. One day, I go to my workplace wearing a new cotton shirt. My colleague looks at me and says, “That is a really fine cotton shirt that you are wearing!” I smile, feel a little proud and get to work. What did I do to feel proud of it? Can I trace the history of this shirt?

I bought it from the shop in the city that is run by an honest businessman who worked very hard all his life to have that shop up and running despite tough competition. Some truck driver drove the truck that brought the shipment of shirts that had the one I bought. It was packed neatly by someone in a factory who did it well so that it wouldn’t get dirty. It was stitched by a tailor who worked very hard to make ends meet. He too did it quite well or else he would have lost his job. The cloth came from a weaver; for all I know, it was dyed by a mother who wished for a better paying job to support her children! The thread used to make the cloth was rolled by someone. Of course, you might protest that a few machines did all the work, but there were those who built and operated the machines. Then there was the cotton that made the thread, and the people who worked in the plantation growing the cotton. And in all of this, what did I do? Nothing! I only had the money to buy it. All that work went into it, and I get to be the proud owner of the beautiful cotton shirt.

What about all the other shirts in my wardrobe? The watch I wear, the pen I use, the fan I sit under in summer, the machines I use at home, the gadgets, the furniture, the cosmetics I use, the toilet I flush and the garbage I throw out every day? Not to forget the most important things of all—food and water. Behind each of these things is a group of people who worked to make it the way it is now. Thus we are, unknowingly, connected to so many people and to nature in our lifetime. We realize that a doctor, cook, postman, a scientist, builder, weaver, tailor, the teacher, the cleaner, the dancer and computer programmer, all need each other. It is ironic that we live in a world where people who grow food have very little to eat, those who make our clothes have very little to wear and those who build our houses often have very small homes of their own. If we had to grow and cook our own food, what kind of food would we eat? If we had to stitch our own clothes, what kind of clothes would we wear? If we had to build our own houses, how big a house would we build?

We live in a universe that is immensely old and vast and while we live in it, we are ridiculously insignificant and within this insignificance we are hopelessly, hilariously, dependent on nature and others for the comfortable life that we live! And yet we often think that we are who we are because of our own qualities or hard work while our context was largely defined by decisions taken by others. It surely must be the purpose of education to make everybody conscious of this inevitable truth of life.

We have looked at this issue only in one direction. The other direction, in my opinion, is a lot more important. The purpose of right education must not only be to understand this unimaginably tangled, inextricable web of social dynamics, but also to help ourselves probe the depths of our being and to understand how I, as a person, am part of this complex web. Not just to take…but also to give. While we are who we are because of our history, we are also responsible for defining a future—one that does not show much promise from the way things are going.

Krishnamurti said, “Truth is a pathless land.” The truth is for each one of us to seek out for ourselves in our lifetime. It would be presumptuous to think that children will understand the context of their lives while in school. But as a wise teacher once told me, “The child’s learning is the byproduct of the teacher’s learning.” When we try to understand the context of our lives, we play a major role in laying the foundation to start the thought process in children too.