The Calendar of Nature: Connecting Children with Nature through the Observation of Trees

The natural world is changing so rapidly that entire landscapes are being unrecognizably altered within a few decades. These changes are driven Tby humans in one way or another. We affect these changes directly, in removing habitats for mining, dams and houses, and in continuing to hunt species on the land and the sea. Human activities also have indirect effects, for example, in spreading invasive species, and in nudging the earth’s climate further and further from what wild species are used to.

The need has never been greater for individual and collective action to stem this tide of change and loss, and for the social and political will to temper our desire for more and more. Only then will future generations be able to wonder at the beauty of a coral reef, the grandeur of a rain forest, or the hypnotic stare of a wild tiger. What is required for this action to occur? Simply put, we need an emotional as well as intellectual engagement with nature. We need to experience an emotional connection through which we value nature for its own sake—otherwise we lack motivation; and we need to use our intellect to understand the problems facing the natural world, and to devise solutions.

The question I would like to pose here is this: Can we engage both the hearts and minds of children in nature through a constructive school-based activity? I think the answer is yes, and below I describe one such activity.

One of the dramatic effects of climate warming, an effect that cannot be explained away by sceptics of climate science, is on phenology—the timing of seasonal events in the natural world. Seasonal cycles in temperature and rainfall influence bird migration, the flowering and fruiting of trees, and the reproduction and growth of virtually every living organism. The change in climate, from decade to decade, changes these seasonal cycles and, in consequence, seasonal patterns in nature. The change in phenology in response to changing climate has been well documented in North America and Europe. Summing over various phenological measures, including migration time and the emergence of leaves and flowers, spring is calculated to be arriving three days earlier every decade in these regions.

In the tropics and the developing world in general, and in India in particular, very little is known about decade-to-decade changes in phenology in response to changing temperature and rainfall. There are anecdotes about drastic shifts in flowering, for example of the Amaltas (Cassia fistula) in Kerala, but we simply don’t know how widespread such patterns are.

To document these possible changes, we have started a project called SeasonWatch. In SeasonWatch, we invite members of the public to contribute systematic observations on the timing of fruiting, flowering and leafing of trees. The basic activity consists of choosing a tree to monitor, visiting that tree once a week, and noting down simple details of its leaves, flowers and fruits. The tree can be anywhere—in your garden, along your street, at your office, or in your school premises. A year’s observation allows you to draw up a calendar for your tree, which can then be compared with other trees of the same kind, with other parts of the country, and with other years. The figure shows an example of a year-by-year comparison taken from phenological observations of trees at Rishi Valley School in South India. 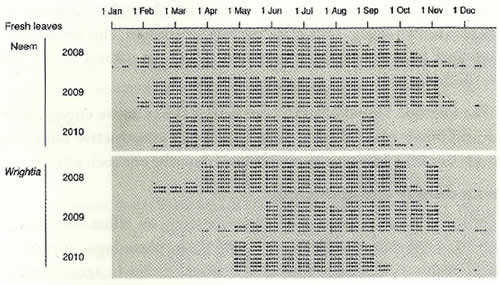 Figure: Patterns of emergence of fresh leaves in two species of trees, Neem (Azadirachta indica) and Pala Indigo (Wrightia tinctoria) at Rishi Valley. Forty individuals of each species have been monitored fortnightly since end 2007. Each dot represents a tree with fresh leaves. Clusters of dots mean that many trees had fresh leaves. You can see that the emergence of fresh leaves begins a little later for Wrightia than it does for Neem each year. For both species fresh leaves emerged over a longer period in 2008 than in 2010. Wrightia shows a particularly shortened period with fresh leaves in 2010. The difference between the years might be because of differences in rainfall in the previous years: total rainfall was around 900 mm in 2007, but only 600 mm in 2009. The reduced rainfall in 2009 may have led to lowered food production and storage by these trees, and therefore a delayed and shortened leafing period in the following year.

What can these observations tell us? At their most basic, they build up a simple documentation of seasonality. But they also allow us to compare yearly changes in phenology with year-to-year changes in climate, and to warn us about potential disruptions in ecological networks. The possible disruptions arise from the fact that plants are the backbone of any ecosystem. They produce food out of carbon dioxide, water, sunlight, and little else. Everything else depends directly (herbivores) or indirectly (carnivores, decomposers) on the food that plants produce. Since much of this food is produced seasonally (as leaves, flowers and fruits), any change in plant seasonality can profoundly affect the animals that depend on plants. There are already a couple of examples from temperate regions where a mismatched change in phenology might be leading to population decline in some species.

So SeasonWatch helps to document potential changes in phenology and to provide a warning if things are not going so well. But how can it contribute to an emotional connection with nature? The idea here is that, by noting down what a tree is doing, week after week, a person develops a bond with that tree. I have been monitoring two trees on my walk to my office for almost two years now and I have begun to think of them as my trees, not so much with a sense of ownership, but rather with a sense of responsibility. As I begin to understand the various interconnections affecting my trees—the rain that stimulates fresh leaf growth, the soil that provides nutrients, the birds and butterflies that visit it, and the constant threat of the road-widener’s axe—my sense of responsibility broadens out from the individual tree to the larger world around. Whether, in fact, such an emotional connection develops in those who participate in SeasonWatch remains to be seen. This may not happen spontaneously and so we must develop additional tools and activities to encourage it.

Having already gone through a long period of educational and social programming, adults may be less susceptible to developing these emotional connections. But children have perhaps not yet been fully co-opted into the modern world’s disdain for nature. For this reason, SeasonWatch has a strong emphasis on drawing in schoolteachers and children to the project.

In our schools programme, children monitor trees, and teachers coordinate the activity. The activity can be class-based; or it can be carried out as part of a school nature club, as in many of the schools we work with in Kerala. The basic activity is standard: a child chooses or is assigned a tree, and then spends five minutes at the tree every week, noting simple information about its leaves, flowers and fruits. Now, doing this week after week can get very dull, so we are working on a weekly activity book that will make participation both more interesting and more educational. Some activities can be more creative, like sketching a leaf or the entire tree; others encourage cross-disciplinary application, such as estimating the height of the tree using trigonometry or simple ratios (the ratio of the height of a tree to the length of its shadow is the same as that for a student, or a pole of known height). Students can discuss their favourite nature-themed poems and what imagery best evokes the rustling of leaves in the wind; and they can document the variety of creatures from ants to bats that inhabit their tree. They can explore the texture of its bark and fruit; and examine the bumps and spines of its pollen under a microscope.

In this way, SeasonWatch can be expanded or compressed according to the needs and flexibility of the school and children. At its most basic, participating in SeasonWatch requires just five minutes a week, to note the state of leaves, flowers and fruits. At the next level, children would work on the pre-designed activities described above. But if tree-based exploration is embraced wholeheartedly into the school system, the possibilities are limited only by the creativity of teachers and the children themselves—for example, for language class, children could write a poem about their tree; for maths, they can use the tree to explore counting, fractions, trigonometry, and fractals, depending on their age; for physics, they can address questions of stress, strain, structure, stability and elasticity; for biology, they might investigate carbon storage, pollination, dispersal and biodiversity. Through all this, we might perhaps emphasize that the tree is not just an object that provides us something that we want (shade, fruit, wood, oxygen), but a living, breathing, growing entity with a history and a future—and it is one of billions of such organisms that share the world with us. 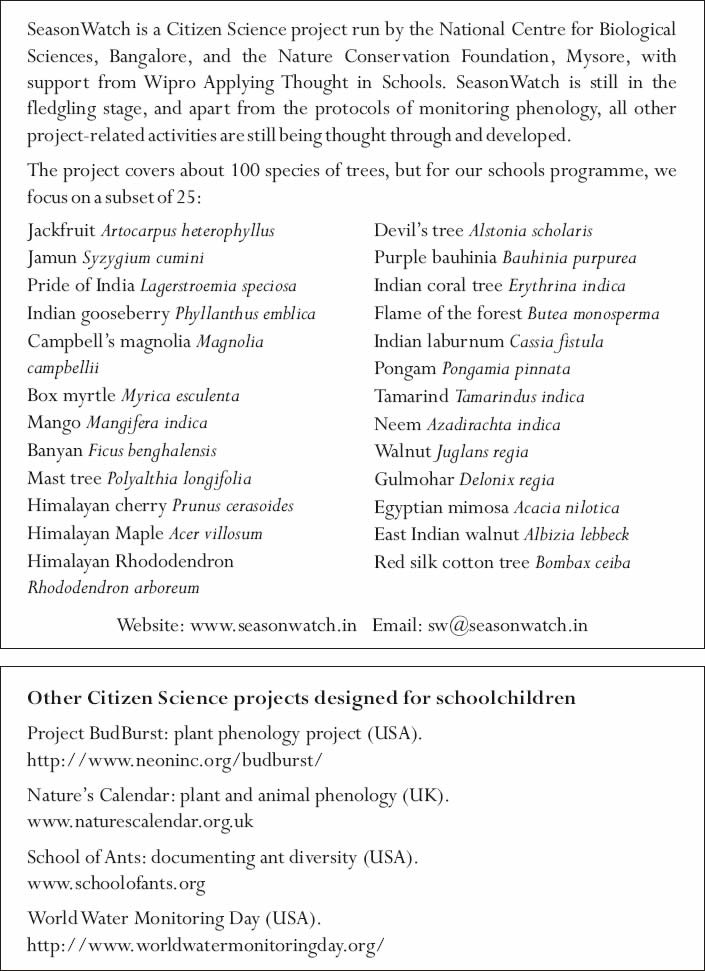