Outdoor activities form an integral part of school education. These include nature study, bird-watching, trekking, mountaineering, and so on. Astronomical observations are a natural extension of such activities. In particular, when students are taken for trips to remote and hilly places, they can be given some idea about the advantages of low levels of pollution (due to dust and light) in being able to watch the night sky. The conditions for night-time observation are very good in some places and it is possible to see, sometimes even without any optical instruments, objects in the sky like the Milky Way, the Andromeda galaxy, and the beehive star cluster in Cancer which are not visible easily from cities.

Introducing astronomy as a regular activity at school level has now become possible in India as a consequence of the availability of good optical instruments and components. Children are always excited to see cosmic objects starting from the planets to constellations, star clusters and galaxies. Our closest neighbour, the moon, offers clear views and the possibility of comparing your sketches with detailed moon maps.

Before putting your eye to a telescope, it is advisable to become familiar with the sky and the motion of stellar objects. An umbrella with diagrams of a few familiar constellations stuck on the inside at appropriate places can be a valuable tool for this purpose. Such an aid can be used also to explain the advantages of an equatorial mount for a telescope as compared to an altaz (altitude–azimuth) mount.

The first familiarization exercises are best carried out without optical aids. The large field of view of the naked eye is an advantage. The movement of the stars across the sky from sunset to sunrise and the annual variation in this pattern can be explained.

Many students these days have a pair of binoculars. The full potential of this instrument can be exploited. Binoculars have a comparatively wide field of view and are easier on the eyes. For viewing objects near the zenith, it is best to lie down on one’s back. It is worth noting that a large number of comets have been detected first by binocular observers working from their backyards. They can easily spot a new object straying in their field of view and track its motion night after night. Binoculars with objective diameter larger than 50 mm are too heavy to be held in hand. Also binoculars with magnification greater than 10 require a stand to get a steady image. Thus 10 × 50 seems to be the highest specification which can be used without a stand.

For those who prefer to keep their glasses on, binoculars with adequate accommodation are necessary. [Accommodation is the distance at which the eye must be placed behind the eyepiece to get a clear image.] Binoculars always give an erect image since they are designed for terrestrial use. Binoculars with individual focusing for each eyepiece are not convenient for bird-watching. However for astronomical observations they do not pose serious problems.

Selecting and Using A Telescope

The choice of a telescope for use in an educational institution is dictated by the following factors:

a) Number of students to be handled in one observation session.
b) Number of volunteers (teachers/students) available for adjusting the instrument from time to time.
c) How much portability is needed for the instrument.
d) Whether photography is intended.
e) Budget available.

On Building A Telescope

We can examine the relative merits of two basic designs of telescopes for their use in a school. For a given budget, a Dobsonian reflector can give you maximum light gathering power, which is proportional to the square of the diameter of the primary mirror (for a reflector) or of the objective lens (for a refractor). Readymade Dobsonians (Dobs for short) are not too expensive: about Rs 18, 000 for a 6’ Dob to about Rs 80, 000 for a 12’ Dob (www.Skywatcher-india.com; www.tejraj.com; This email address is being protected from spambots. You need JavaScript enabled to view it.). Note that the light gathering power of a 12’ mirror is four times that of a 6’ mirror. Higher light gathering power enables one to see fainter objects in the sky. Most of these instruments are made in China under license from reputed manufacturers. 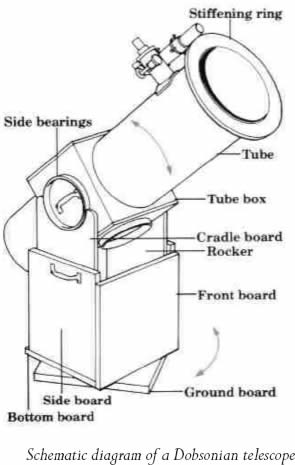 It is possible to build a Dob from a kit which includes the primary mirror, diagonal mirror, spider, two or three eyepieces, one Barlow lens and perhaps a solar filter. These components can be assembled using simple carpentry tools, plywood, and a few pieces of Teflon sheet. Such a homemade Dob may not have the sleek appearance of a ready made instrument but you can get valuable experience while making it and can ‘fix’ it if anything goes wrong. Also the total cost works about to about half of a ready made one. Dobsonian kits are available at $230 for a 6’ f/6 kit and $240 for a 8’ f/6 kit (www.e-scopes.com).

The major drawback of a home made Dob is that it needs to be adjusted repeatedly during observations not only because the object moves out of the field of view but also, more often, because new observers, while adjusting the eyepiece, disturb the alignment of the telescope. It is possible to construct a tracking mechanism on a Dob but this is a project involving stepper motors and computer programmes. This takes considerable expertise.

Some models with an equatorial mount come with a drive motor. Often this motor does not make the instrument a self-tracking one. It only enables you to turn the appropriate knob by pressing switches. This is a help to avoid inadvertent disturbances of the alignment while turning knobs.

The position coordinates of an astronomical object in the sky is denoted by two numbers called the right ascension (abbreviated RA) and declination (dec). These are equivalent to the longitude and latitude respectively of a point on the surface of the earth. The RA is always indicated in time units using the equivalence of 360° in RA to a time interval of 24 hours. This is possible because we can imagine all the astronomical objects to be stuck on the inside of a large sphere with ourselves, that is, the earth, at its centre. This imaginary sphere is called the celestial sphere. The distance of all these objects from us is so large that the motion of the earth around the sun and of the sun in our galaxy has no significant effect on our view of the celestial sphere.1

A ‘Go To’ telescope refers to a telescope which is computer controlled and which has, in its memory, the coordinates of a large number (several thousand) of astronomical objects. Initially the location of the telescope (geographical longitude and latitude of the place of observation) and the local time have to be entered in the memory of the telescope. After that when the RA and dec coordinates of any astronomical object are entered on the keyboard, the telescope turns about the appropriate axes and points toward that object. Such an instrument, with the ability to track the given object, would be ideal for an educational institution. However, Go To telescopes are much more expensive than conventional instruments. Another factor to be kept in mind, particularly for educational institutions located far away from big cities (where the telescope dealers have their showrooms) is the possibility of electronic failure of the system. Even within the warranty period, it may take quite some time to get spare parts and repair services.

Building or selecting a refractor telescope also has its own special considerations that need to be kept in mind. Among these is the need to eliminate an optical phenomenon known as ‘chromatic aberration’. The focal length of an ordinary lens is slightly longer for red light than for violet light. This has an effect on the quality of the image which shows slight colours at its edges. This effect is known as chromatic aberration.2

Shifting a telescope from its storage room to the place for observation can be a time consuming and somewhat risky operation. One could keep the telescope on a wheeled platform which can be rolled out of the storage room onto an open space for observations. This arrangement will reduce the time required for shifting the instrument and for the initial setting.

Recently the Inter-University Centre for Astronomy and Astrophysics (IUCAA), Pune, in collaboration with Microsoft, have introduced an astronomy software called the World Wide Telescope (WWT) which is designed primarily for science and astronomy educators. This free software enables one to access the astronomical pictures recorded by the Hubble Space Telescope and also other major telescopes around the world. One can scan any part of the sky on one’s computer monitor with the high resolution that these instruments are capable of. Images taken at different wavelengths can be scanned. Even X-ray, gamma-ray and radio emission images (rendered visible) can be seen on the screen. Terra bytes of data are available waiting to be examined and interpreted by anyone who wants to explore this field. In the seminar on WWT held at Pune in September 2010 Prof. S George Djorgovski of the Centre for Advanced Computing Research, California Institute of Technology, USA, spoke about a paper on the optical discovery of an apparent galactic supernova remnant by Robert Fesen and Dan Milsisavljevic in The Journal of Astrophysics. Within weeks of the paper’s publication, someone used the WWT to scan the indicated part of the sky and saw the ring of smoke which looks like the signature of the supernova. This picture was projected on the screen during the seminar.3

Personally I believe that astronomy can trigger an expansion of awareness as no other subject can. To be able to see that a wisp of light waves, a mere disturbance in space, which left its source millions of years ago, was travelling for aeons through interstellar space, past galaxies and star clusters, to enter your eye tonight to give you information about its source, is nothing short of a miracle. A glance at the gigantic interplay of matter and energy going on perpetually in interstellar clouds of gas fills the heart with humility and gratitude—for having received the gift of a body and a mind which enables you to understand, in a small measure, the workings of the universe. It looks like a speck of creation getting enamoured with its own larger image.